Below is a summary of talks and events hosted by the IRRS London. If you would like any further information about a subject or wish to get in touch with the speaker, please use the Contact Us page

It was welcome back to some 20 members to the Calthorpe Arms for the second lecture of the 2022-23 season. Unfortunately due to technical issues only the second half of the talk was transmitted on Zoom. Tim Morton introduced the speaker Jim Eagar – author, photographer and railway modeller, Jim explained the genesis of production of his series of books illustrating a 35-year period of change on CIE and Irish Rail, from 1974 to 2008, a period dominated by diesel locomotives between the “end of railcars and the arrival of railcars”. Jim emphasised his interest is on railways in general – the lines, infrastructure etc – not limited to locomotives and preservation.

As well as passenger trains, his illustrations showed many long closed lines and the transition from loose coupled goods trains to mechanical handling and eventually to the present day block freight operation. During this period virtually everything on our railways, from the rails and sleepers to the tickets and signals had changed completely.

A fascinating part of his talk addressed the problem of restoration of faded and damaged photographic slides, with before and after examples.

The IRRS London Area, 60th-anniversary  was celebrated on Saturday 5th  November 2022 at the Dickens Inn in St Katherine’s Dock in central London. 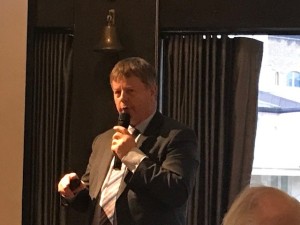 CEO of Irish Railways, Jim Meade gave us a detailed lecture on the current state of IR and plans for the future. The talk followed a 3 course lunch in a private suite. Despite train strikes and dull weather members and guests enjoyed the day with plenty of opportunities to chat to friends. The proceedings were introduced by Area Chairman, Tim Morton and were prefaced by an address from IRRS President Dick Fearn congratulating the Area on its 61 year history and remembering the place London has within the Society. He brought congratulations from the parent body and the Cork and Manchester Area. After a Q&A session, the day concluded with sufficient time for everyone to travel home – often on last trains departing from London at an early hour.

Irish railway preservationist, photographer, and author, Charles Friel, brought us an updated and lavishly-illustrated talk on the GNR’s Dundalk Works, opened in 1880. Delivered on Zoom, Charles gave us a detailed exploration of the history, life and times of the Works. He carefully explored the geography of the site explaining the purpose and workings of the various departments from the Erecting shop across the transverser to the Machine shop, Smithy and Paintshop, Charles emphasised the noise of the machinery particularly the steam hammers. The Works maintained steam locomotives (including 47 built there) and built and maintained hundreds of carriages, wagons, railbuses, railcars and road vehicles. His illustrations showed the variety of locos repaired and constructed in the works. Every square inch of the confined space was utilised. Charles in an aside explained that a proposed, but never built, GNR 4-6-0 would simply have not fitted in the shops. The pictures included the people who made the place tick as well as stories from behind the scenes. Some pictures date from the 1890s, many having been rarely seen in public, if ever!

After the interval the he explained what happened after the Works became privately-owned in 1959 and what remains of the once-great institution today. Photographs of the Carriage shop and beautifully finished coaches was followed by the range of buses, fork lift trucks and Sylva caravans built there. Charles showed the alternative uses to which the Works were used. Included in this range of products were Heinkel Bubble Cars!

Charles selection of photographs and his knowledge of the subject was appreciated by the audience. A particularly poignant set of illustrations was the final steam locomotive out-shopped – No 174 and the lines of withdrawn locos awaiting scrapping!