“Ulster Steam in the 1960’s : Some Untold Stories” by Joe Cassells 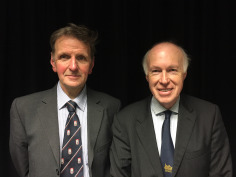 A lifelong observer of the Ulster railway scene, Joe Cassells, shared his intimate knowledge of UTA steam operations in the 1960’s and of the men who worked the railway.

His wonderful presentation was Illustrated by his own photos and those of the late Irwin Pryce, including images of one coach locals, heavy freight on the Derry Road, 800t spoil trains, docks shunting, steam boat trains, Sunday excursions and much more, plus behind-the-scenes shots from railway workplaces such as footplates, sheds, stations and signal cabins. Joe’s talk was replete with insights, insider memories and rarely told stories and thoroughly enjoyed by all present.

Bord na Móna carries over 3 million tons of peat each year on approx. 900km of track, hauled by locos ranging from Rustons built in the 1940s in Lincoln (which outlived more modern Andrew Barclay steam traction) to modern Irish built locos designed and built in house by Bord na Móna themselves.

Sean Cain (who works as a Traincare Technician with Iarnród Éireann) shhared his interest in the Bord na Móna Railways, with stories & photos dating back to childhood days in the 1980’s. He spoke of the large and small Bord na Móna operations across Munster, Connaght and Leinster and showed how they have evolved over the decades.

Alan spoke about the railway lines between Limerick, Tralee, Foynes and Fenit, covering construction in the 19th century, operation & traffic, decline and fall in the 20th century and recent resurrection as a walking & cycling Greenway for the 21st century.He presented some very odd stations and shared entertaining anecdotes about Newcastlewest’s very own runaway train and how the impecunious Rathkeale company almost got “one up” on the Board of Trade!

“The Armagh Railway Disaster of 1889″ by Canon John McKegney + AGM

John’s presentation recalled the devastation of the 1889 Armagh Railway disaster with contemporary photographs and recordings of eye-witnesses of the event. John also shared his experience of meeting a “survivor”, a man forbidden from travelling on the day In his childhood and who recalled visiting the site of the accident and seeing the bodies of his friends.

John gave insights into the effect of the accident on the community in Armagh and how it forced the government’s hand in introducing the first health & safety legislation for the railways.

The AGM that followed led to the re-election of the existing committee and a lively discussion about future venues and promoting the society to younger enthusiasts.

Railway photographer and IRRS Photographic Archivist, Ciaran Cooney, gave a wonderful presentation of the late Norman McAdams’s photo-collection, depicting both everyday and rare scenes throughout the Irish railway system during the early 1960s – all in colour, digitised and painstakingly restored to their superb original quality. Steam and diesel traction from CIE and GNR(I) featured, as well as a many lines now long since consigned to history.

Ciaran also briefly described the digitisation of the IRRS collections, and the preparation of high quality photos for the Journal.

Dick reflected on his time with Iarnrod Eireann, both as Chief Operating Officer from 2003 to 2006 and as Chief Executive from 2006 up to his retirement last year.

Having previously spent 30 years with the railways in the UK before moving to Ireland, Dick compared and contrasted the job of managing railways in the different cultural and political environments of the UK and Ireland. He shared many hilarious anecdotes of his encounters with Irish politicians and CIE board-members.

He spoke of the enjoyment he had in the job and talked fondly about some of the characters he met whilst living and working in Ireland over the past decade.

“Railway Preservation Society of Ireland: Fifty Not Out” by Charles Friel BEM

Charles Friel has had many roles in the RPSI throughout its first 50 years.

On October 16th, to an enthusiastic and appreciative audience (who were not afraid to share their own anecdotes) he celebrated the hard work of his fellow, determined amateurs (many of whom are still active) on the long road to establishing today’s self-sufficient heavy engineering base, and running 71 main line trains and attracting over 20,000 visitors in 2013. RPSI steam trains have visited every corner of the system and Charles recalled many almost-forgotten episodes and first time events.

He also gave a glimpse of what is envisaged for the next 50 years.