“What lay behind the 1957 GNR(I) Closures” by Steve Rafferty 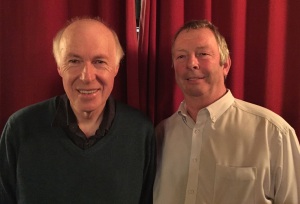 Steve shared his wonderful insights into what lay behind the decisions to close many Great Northern Railway (Ireland) lines. Steve’s presentation included contemporary, 60 year old BBC Northern Ireland (NI) material which highlighted the key issues and sensitivities at the time.

Stopping frequently during the recording, Steve elaborated on the complex political, media and social discussions leading up to the 1957 closures as well as using the footage to share unique views of railways in Northern Ireland taken by BBC’s professional cameramen. Steve’s talk ended with a lively conversation about the political & economic realities of the day and Steve shared his own conclusion that ultimately, economic reasons lay at the heart of the decision to close the lines. Steve’s engaging style and excellent supporting material made for a very successful night with a capacity crowd of over 50 people in attendance.

Michael, former IRRS Chairman, showed a collection of images shot in 1930s, including some West Clare vehicles at Inchicore works, together with a substantial number of images from the ‘Callender Collection’ showing views in the final years to closure in 1961. In addition, some contemporary scenes were included, recently taken by Ciaran Cooney, depicting extant buildings and how , in most instances, where they had been sympathetically adapted for modern day use; it was interesting to note some retain the station canopies.

Peter gave a truly excellent talk. He spoke of his studies at the Royal Belfast Academical Institute (the ‘Inst’ – one of the components of the nascent RPSI in 1963) and after University, he joined NIR spending 30 years mainly in Special Projects until retirement 5 years ago. As the RPSI’s Loco Officer since 1972, that society owes Peter a huge debt in establishing Heritage Engineering Ireland Ltd (HEI), a wholly owned subsidiary that maintains the Society’s Locos and undertakes contract work for other concerns in the U.K. and Ireland.

Peter illustrated his talk with a fascinating selection of photos and videos of the many and diverse processes undertaken by the company, including forging replacement connecting rods, cross heads, smokeboxes, etc. During questions from the floor, Peter outlined the possibility of a new ‘Jeep’ similar to No 4, built from many parts that are ‘in-stock’, comparing this to the ‘new-build’ projects being undertaken elsewhere. Peter stated that the production of a second loco will greatly assist with the RPSI’s expanding programme of special trains operated throughout Ireland.

Mal recently retired as NIR’s General Manager and offered unique insights into NIR’s success since the turn of the century. With investment in new CAF-built trains, park-and-ride schemes and station & track upgrades, this positive approach to improving rail services has been rewarded by more than a doubling of passengers.

Mal also set out the current vision for the future development of the rail system, including the ambitious Belfast Transport Hub beside Great Victoria Street station, aspirations for electrification and a 90-minute Belfast-Dublin Enterprise timing at speeds of up to 125 mph.

This is an exciting period for NIR and it was illuminating to hear about it from a company perspective.