Conrad began his talk with a quiz, making good use of his wide selection of Irish photographs, mainly taken in the 1950s and 1960s – needless to say won by a senior Irish member who was on some of the trains!

Conrad was at Trinity in the late 1950s and early 1960s and he explained how he travelled far and wide in search of the remaining Irish steam workings, aided latterly by a secondhand van which appeared in at least one photograph! As well as well-known mainline activity, he recorded the “seaside” excursions run on the Great Northern lines to take Dubliners to the seaside and the remarkable three day ballast cycle which was steam worked from Lisduff quarry until the early 1960s.

An evocative view of the past, illustrated by superb photographs with a lively commentary full of anecdotes.

Tony Ragg described the careers of the remarkable Bowman Malcolm who became Loco Superintendent of the B&NCR when just 22 years old, and one of his successors,  Percy Stewart, who just happened to be Tony’s grandfather.

Malcolm is justly famous for his espousing compounding (encouraged by Lang of Beyer Peacock) and especially the two-cylinder variety. Malcolm tested otherwise identical locos working as simples and as compounds and found the latter 12% more economical. He also introduced automatic vacuum brakes to the B&NCR, in advance of governmental demands after the Armagh Disaster. As a Civil Engineer, he rebuilt the Bann Bridge at Coleraine.

While working to Wall, the Civil Engineer, Percy Stewart was effectively the Loco Engineer and was responsible for the rebuilding of many earlier locomotives into the famous “Whippets”. He became Loco and Civil Engineer in 1930 and supervised the building of the Bleach Green viaducts – Ireland’s only “flyover junction” and an enduring legacy to him. Unhappily, he died before it was completed.

He clashed with the NCC’s Manager Major Malcolm Spier over the direction to be taken by his department. Stewart wanted a variant of the famous Midland Compounds, but Spier was insistent on a mixed traffic loco and of course had his way with the famous “Moguls”.

Percy Stewart resigned in 1932, suffering from ill health, and died the following year after a very short retirement. Malcolm, on the other hand, had enjoyed a long retirement, but died the same year as his less well-known, but worthy pupil.

Richard McLachlan explained his role as assistant archivist (drawings) which meant that he was busy digitising  botht the existing drawings in the Archive, but also a number of collections either bequeathed or loaned to the Society.  Among these were many drawings and documents apertaining to the Midland Great Western Railway of Irealand. These were the subject of his talk to the Area.

He explained that he found many railway histories a bit dry, leaving him wondering just what it was like to be a passenger on the trains of yesteryear. A study of the documents in the Archive was starting to provide him (and us) with the answers.

Illustrating his talk with maps, working timetables, and rolling stock returns, Richard explained that the MGWR at its peak had 139 locomotiveas and less than 200 coaches. This seemed few for such an extensive network of lines, but a glance at the timetables showed why these sufficed – typically just three or four passenger trains each way per day on each line!

He then went on to show astonishingly-detailed drawings of all manner of passenger rolling stock from the lowly third (which looked to have better seating than some London suburban trains these days!) to the oppulence of the bogie First Class carriages, right down to the provision of toilets. He described the evolution of horseboxes (an important traffic for the Railway) showing that the equine passengers seemed to fare better than the grooms accompanying them!

Concluding, Richard showed a number of very detailed civil engineering plans showing exactly where the railway passed through the countryside. His tlak provoked lively comment and questions from the floor – an enlightening presentation.

The London Area of the IRRS celebrated the 70th anniversary of the society in the splendid surroundings of the Irish Embassy in London. 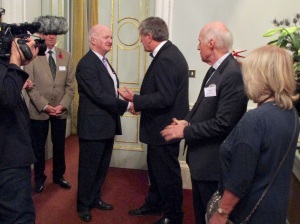 His excellency, Ambassador Dan Mulhall opened the evening’s event by greeting guests at the top of the stairs leading to the ballroom. He spoke about the shared experiences of railwaymen in Britain & Ireland and the old experiences of Irish people travelling to Britain, arriving at Euston & Paddington off ferries to Holyhead & Pembroke. He concluded his welcome with an excerpt from James Joyce’s “A Portrait of the Artist as a Young Man”, about Stephen Dedalus’ experience on the mail train from Dublin to Cork.

IRRS Board member, Alan Hyland, gave a brief history of 70 years of the society, from its initial inception & humble beginnings through to modern times and the introduction of an eJournal. There was a palpable swell of pride among members in the room as he spoke of the community of Irish rail enthusiasts.

London Area’s Chairman Tim Morton spoke about the Area’s regular activities, (which are set out elsewhere in this website) and gave a history of the Area from its earliest days when Lance King established the Society in London in 1961. He explained how the London Area maintains close relations with the Parent Body in Dublin through financial support for archiving activity there, expanding the Society in Britain through attracting new members to its meetings, and in handling bequests to the Society received from members and friends based in England.

Leslie McAllister presented the Ambasador with a specially bound version of Steaming in Three Centuries, a book published by the London Area.

Oliver Doyle, recently retired Operations Manager for Irish Rail gave a fascinating presentation of Irish Railway history over the 70 years of the Society’s existence. He highlighted many key changes in the railway system over that time, generously illustrated by photographs from his time with Irish Rail, including his own involvement in many of the projects described.

All present greatly enjoyed this very special occasion, the hospitality of the Ambassador and the Embassy, and the opportunity to enjoy the camaraderie of many fellow IRRS members and others. It was unique in the history of the London Area and it was a memorable evening for all who attended.

“Broad and Narrow Gauge in the 1950’s” by Michael Davies 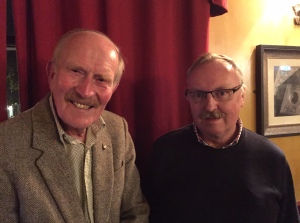 Michael opened the evening with a wonderful stories of his early excursions to Ireland as a teenager, stories delivered with such clarity, he may have only travelled last week instead of nearly seventy years ago!

He shared anecdotes of making lifelong friends, of characters he met along the way and the journeys he took. Micheal then presented some of his extensive slide collection, including many mono-chrome slides from his own collection and colour slides he has gathered during his life.

Two slides stood out for me, the first showing the wreckage of a car having been hit at a level crossing; the second was as slide he had purchased only to realise after buying it, he was the person standing on the platform. Michael’s charm & easy storytelling made the evening a most enjoyable one and Tim expressed his hope that Michael will return again to share more stories & slides in the future.